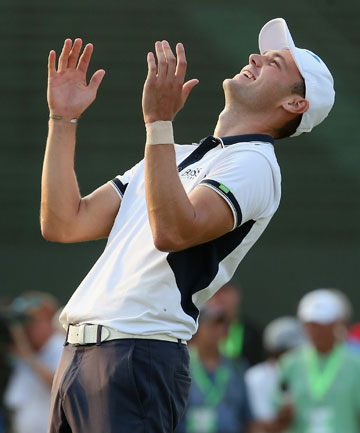 Going coast to coast and winning by 8 in a U.S. Open!? That's unbelieveable! How did he do it?

1. He was created in a secret underground factory in Dusseldorf, Germany###

2. He stayed out of the "real" bunkers

When Kaymer made eagle on number 5 on Saturday. Why was it such a huge moment? For starters, he had a very shaky start. He did very well to only go +2 on the first 4 holes, and had badly pulled his drive into the sandy waste area on the left on 5. So negating those bogeys and overcoming that drive was huge for his score and confidence. More importantly, however, it was Exhibit A to the fact that he can hit a draw, on-call, under pressure now. That was his goal when he deconstructed his swing in 2011 and has been attributed as the driving factor for his ensuing 2-year semi-slump. So the second shot long-iron draw into the green showed the he had attained his goal: the draw. And what a beautiful shot it was.

After he made back to back birdies on 13 and 14 on Sunday. He could have shot 40 on the back nine in which case others may have played differently and applied more pressure. He did make a mess of the Par 5 10th, but after dropping 2 bombs back-to-back it was all over.

Some remarkable context to Martin's scoring / the difference between pros and amateurs / the importance of short game...

Summary: This is just the beginning

Kaymer is too talented and too strong mentally to not win (at least) 5 majors.

He has no weaknesses! He's a phenomenal athlete (he basically told Tom Rinaldi in his interview afterward that he thought he could have made the German World Cup Fútbol team). He's long off the tee. He's an excellent putter. He's patient and super cool under the gun. He can hit it both ways...


As always, you can download the Hole19 GPS iPhone app for free to get all your distances and track stats like a pro.