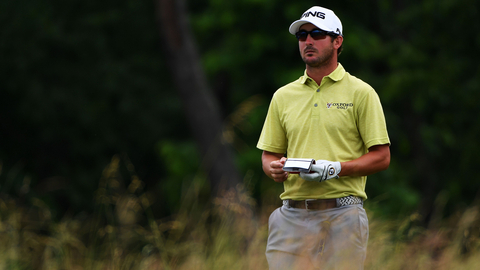 Thunderstorms took over at Oakmont Country Club, but surprisingly the main strike came from one American player, Andrew Landry.

Graduated from the University of Arkansas, Andrew Landry turned pro and joined the Web.com tour in 2009. In 2015 he played his first tournament in the PGA Tour, failing to make the cut, but still able to bring home a victory at the Cartagena de Indias at Karibana Championship (Web.com Tour).

Things have turned this year for Mr. Landry, where he played 11 events and made 5 cuts. He is currently 624th in the World Golf Ranking with a scoring average of 71.906. His best finish in a PGA tour event was last week, when he finished T-41.

So yesterday, as happy as we were with the -2 from Matt Fitzpatrick on this 1st day of the U.S. Open, we were overwhelmed by the amazing result of this 28-year-old, born in Port Neches-Groves (Texas). How could we not be? Andrew is playing his 1st round in a major tournament, and what a round has it been so far!

From a technical perspective the main difference in his game - when compared to the other players - is his consistency: he drove the ball accurately (driving accuracy of 71.43%), hit greens consistently (GIR of 72.22%), putt exceptionally well (averaging just 1.692 putts) and he also managed to keep the ball away from the numerous bunkers that surround the fairways and greens.

In detail, he started off on the back nine with a birdie and followed with another birdie before turning to the front nine. And this was where the fun begun: three birdies in a row were more than enough to put him at 5 under par. Before the suspension, he was leading the field with a score of 3 under par. What a great start on a course that is considered the most difficult in America. But not yet satisfied, he converted a 10 feet putt, coming back from the suspension with a birdie that led to a record breaking final score of 66 (4 under par).

This was the best opening round ever recorded at a U.S. Open held at Oakmont, surpassing legendary golfers like Ben Hogan and Gary Player.

We feel that’s quite the jump! Congratulations Mr. Landry.