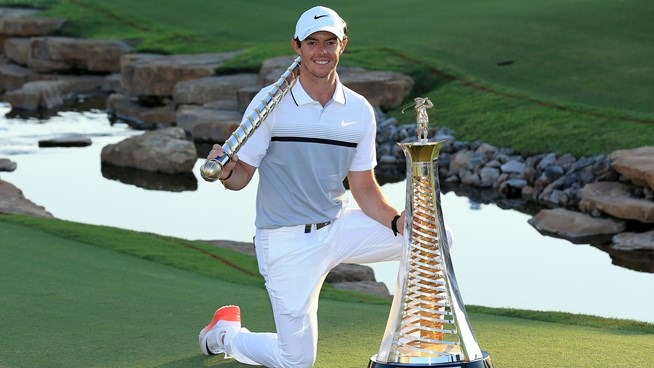 This week sees the climax of proceedings on the European Tour as the DP World Tour Championship, final tournament on the Race to Dubai schedule, takes place.

Since the move away from the old Order of Merit programme in 2009, the Earth Course at Jumeirah Golf Estates presents its eighth annual instalment of the Tour’s ultimate season-defining event.

Alexander Noren’s win in South Africa last week has catapulted the big Swede into third position in the current standings. While a field of 60 will tee it up in Dubai this week, we are now faced with four main competitors in the race to become European Tour champion.

An additional focus for many will be the $5M bonus pool which will be split between the top 10 in the Race to Dubai money list.

The Earth Course at the Jumeirah Golf Estates was built specifically with the Race to Dubai schedule in mind. It was designed by Greg Norman and is one of two within the golfing community at Jumeirah - the other being the Fire course.

A challenging test awaits those on the entry list this week. Over 3,500 trees line the course and more than 100 bunkers lie in wait to greedily collect errant shots. And all this before we even begin to consider the watery graves in play all throughout the course. The closing 4 holes demand the utmost accuracy and could arguably represent the most difficult mile of golf in the world.

The main attention this week will fall on the four men at the head of affairs in the Race to Dubai standings. Henrik Stenson could have secured the overall title at last week’s Nedbank with a win but struggled to make his mark in Sun City.

This year has delivered a first major and Henrik now enters the final event on the Tour schedule with a comfortable cushion on his competitors. With destiny in his own hands, he will be looking to draw on the Race to Dubai success in 2013 for inspiration.

Being another first time major winner, Danny Willett has enjoyed an unforgettable season. His usual stellar form has proved elusive in recent weeks and the Englishman will be attempting to cap off 2016 with the title of Europe’s champion golfer.

Alex Noren has caught the winning bug. Few on Tour have better proven their ability to get the job done this year than last week’s winner. To really top it all off, Noren needs to ideally win again this week and, as long as Stenson does not finish 2nd, he will walk away the surprise 2016 champion.

Rory has been hanging around in the standings longer than any of us thought he would – indeed, longer than he thought he would. Having skipped both the Nedbank and the Turkish Airlines the week previous, McIlroy had seemingly waved the white flag in the Race to Dubai, content as he was with his dramatic win at East Lake in capturing the FedEx Cup.

As things stand, a win in Dubai, Stenson failing to finish in the Top 45, Willett sitting outside the top five and Noren outside the top two, will see Rory secure a consecutive hat-trick of Race to Dubai titles.

While Stenson is the worthy favourite, this one’s too hard to call. Calculators at the ready……