It's Official: Justin Rose is the world number one golfer once more. After his win at the Turkish Airlines Open last week in a playoff against China's Haotong Li, the current Olympic and FedEx champion rose (no pun intended) to the summit of the men's game. 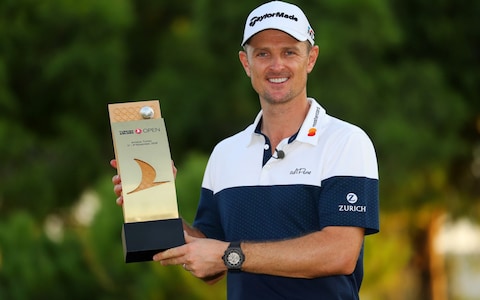 As the European Tour gets ready for its climax, and with the turn of the year not too far off into the distance, we thought it would be interesting to chart the number of times the position of world's best golfer has changed hands this year.

Since the 1st January 2018, the title of world number one golfer has changed on seven separate occasions and, in fact, you could shorten that span to the six months since May when Dustin Johnson finally loosened his vice-like grip on the top slot.

Below we list each of the short-lived reigns atop the Official World Golf Rankings (OWGR)...

After winning the Genesis Open back in February 2017, Dustin Johnson rose to the top of the OWGR ousting Aussie Jason Day in the process.

By 1st January this year, he was still the world number one and despite failing to reach the winners circle he would manage to keep hold of the accolade all the way through to mid-May - a total span of 64 weeks.

He currently sits third in the standings...

It was after the Players Championship back in May that Justin Thomas rose to the top of the men's game for the first time.

The 2017 PGA Champion and PGA Tour Player of the Year was highly deserving of the position at the time and many would have expected that he would remain there for a longer period than the four weeks he ultimately managed.

The Kentuckian is currently fourth in the OWGR...

With a win at the FedEx St Jude Classic, DJ grabbed the world number one position back from Justin Thomas and he would hold it for another 13 weeks.

He secured the victory with a stunning eagle finish...

This tournament span carried the 2016 U.S. Open champion through the season's three remaining major championships - the U.S. Open at Shinnecock Hills, the Open Championship at Carnoustie and the PGA Championship at Bellerive Country Club.

After his second-place finish at the BMW Championship in September, Justin Rose achieved a life-long ambition of being heralded as the best in the world.

His reign at the top was to be short-lived and he would be back down to 2nd position within two weeks. That said he did have a cool $10M FedEx Cup bounty to soften the blow.

Finishing one place higher than Justin Rose at East Lake Country Club was enough for DJ to usurp the Englishman and return to world number one status.

By October 20th, when he finally relinquished the accolade for the final time to date, he had a cumulative reign at the top of the OWGR of 81 weeks.

A win at the CJ Cup @ Nine Bridges helped the newly crowned PGA Tour Player of the Year to overcome Dustin Johnson and take his place at the top of the OWGR.

Want to know Brooks' keys to reaching world number one?...

Two majors in 2018 and three victories in a span of seven of the biggest events in the men's game meant that few would have argued with his new lofty position.

The new world number one shouldn't get too comfortable though, as it looks likely that Brooks Koepka will return to the top standings next week without either man having hit a ball.

They may flip-flop once again before the end of the year. Confused? Yeah, we are too.

While we catch our breath, comment below and let us know who you think will be number one this time next year.

Get your golf game moving in the right direction by downloading the FREE Hole19 golf app today. Simply click your app store button below and you're in great shape to level-up on your golf game as we head into 2019.