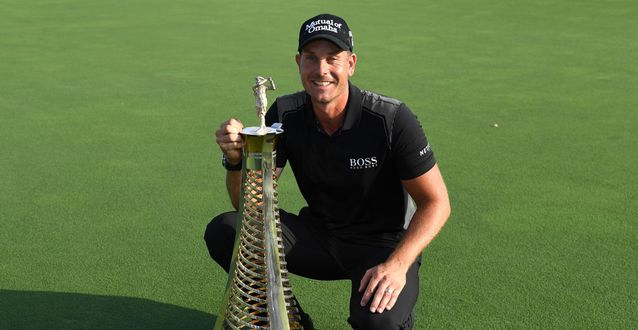 2016 has been a year which Henrik Stenson hopes he can ‘copy and paste’ to help set goals for each season hereafter. Becoming European Tour champion for a second time and getting a major-shaped monkey off your back tends to create quite the template for success.

In last Sunday’s final round of the DP World Tour Championship, Stenson put together an impressive 65 (7 under) to cement his place atop the final standings of the Race to Dubai for the second time in his illustrious career.

Winning the European Tour’s flagship competition required unrivalled consistency throughout a season which commenced in South Africa with the Alfred Dunhill Championship in mid-November 2015.

Having started his own season with a runner-up spot in the first of two seasonal appearances of the Nedbank Golf Challenge on the European Tour schedule, Stenson then picked up a joint third place in the Abu Dhabi HSBC Golf Championship. A first victory arrived in June when he won the BMW International Open at Gut Lärchenhof in Munich by three shots - outscoring both Darren Fichardt and Thorbjørn Olesen in the process.

With a first win of the season already secured, Henrik went into the 145th Open Championship full of confidence. He was playing golf at a level which truly had to be seen to be believed and which could have been termed as ‘exceptional’ but for the fact that the great Phil Mickelson was matching him every step of the way. Well, almost every step!

Stenson’s final round 63 smashed records aplenty, not least the lowest cumulative score in Open history as well as the lowest final round ever by a winner.

What happened at Royal Troon in July of this year surpassed any expectations as two of the game’s stellar names went toe-to-toe in what really was a humdinger of a golfing duel. Indeed, this was a spectacle which will live long in golfing folklore.

Stenson ultimately prevailed and a new major champion was born.

Scramble for the line

As time passed, and things started to really heat up on the Race to Dubai leaderboard, there was an obvious head to head with Danny Willett – who made his own major breakthrough this year. Stenson did manage to take a clear lead ahead of the Englishman in October by securing second place at the WGC-HSBC Champions in Shanghai.

A fourth win of the season for Alex Noren at the Nedbank Golf Challenge provided evidence that Stenson’s fellow Swede could take advantage of his ability to close out tournaments and surge to the title.

Rory McIlroy meanwhile was buoyed by a dramatic win of the Tour Championship at East Lake and, with it, the FedEx Cup. Consistent European Tour form saw him with at least a puncher’s chance of doing the Tour double and leap-frogging each of his rivals by winning the DP World Tour Championship and having other results fall his way.

Alas, it wasn’t to be for any of Stenson’s rivals. He added to his Open Championship win and Olympic silver medal with a solid performance at Jumeirah Golf Estates and confirmed that, once again, he is a most worthy champion of the European Tour.