Age seems to be a relevant topic at the Masters. For most golf fans, when one brings up the topic, there are 2 things that may immediately come to mind.

First is Jack Nicklaus’ famous win in 1986, when, at the age of 46, he came from 4 strokes and 8 positions behind to win by 1 (Aside: Let’s not forget who he overcame: 6 of the 8 players ahead of him after Round 3, Norman, Ballesteros, Langer, Price, Kite, and Watson, were or became major winners, and 3, Ballesteros, Langer, and Watson each ended up becoming 2-time-Masters winners. Incredible).

The second item that may come to mind after mentioning “age at the Masters” is Tiger Woods’ famous win in 1997, when, at the age of 21, he dominated start-to-finish and blew away the field by 12, sending everybody’s jaw to the floor and setting the record for largest ever margin of victory at a major (a record which he later broke again in 2000 at the U.S. Open at Pebble Beach, winning by 15).

Last year, we witnessed what is perhaps a less significant but no less incredible age-related milestone when Tianlang Guan became the youngest Masters competitor ever to make the cut at just 14.

The individual stories are the best, but age looked-at from an aggregate perspective is interesting as well, if for different reasons. Here is a graph of Masters Winners’ Ages over the 77 years of the event: 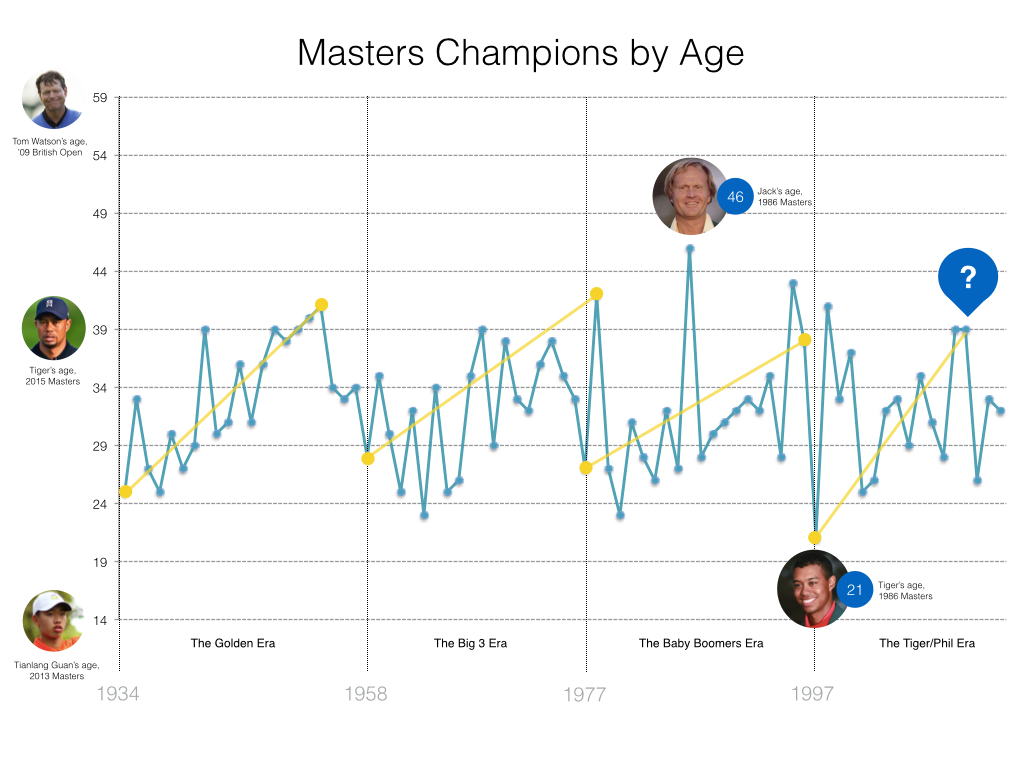 To me, the most interesting part about this graph is how it shows the generational shifts in golf history. It makes sense that Masters’ winners would be a good indicator of “changing of the guard,” as the best players over the years have won at Augusta (Lee Trevino and Greg Norman being among the notable exceptions).

This interpretation of the data is far from infallible - the generations do not have perfectly “hard edges,” meaning they finish and the next one begins. For example, the data suggests that there is a 3 year gap between when the The Golden Era ends and the Big Three Era begins. The opposite case is seen as well - there is overlap between the start of the Baby Boomers Era in 1977 and the end of the Big Three Era in 1978. Also, this denotes era beginnings and endings with wins, not competitiveness, which is obviously a shortcoming.

Further on the subject of infallibility, looking at the graph from Jack’s 1986 win up to 2013, there doesn’t appear to be much of an upward trend, even though I’ve drawn a line from Tiger’s 1997 victory to Phil’s 2010, with a ‘?’ wondering aloud whether the Tiger/Phil Generation for the purposes of this analysis already ended in 2010 (we’ll see).

Taking this observation a step further, the upward lines that I’ve drawn appear to fit the data less and less as time progresses. The line looks like a great fit for The Golden Era, a strong fit for the Big Three Era, a decent fit for the Baby Boomers Era, and somewhat of a reach for the Tiger/Phil Era.

What is seemingly less generational separation and more generational fluidity hints at the theory of the “democratization” of pro golf, where there is less difference between the top-ranked players and players ranked, say, in the 40s and 50s in the world. The odds of winning are distributed more evenly to more players.

That is a bigger subject for another day, but the data shows there’s less and less domination at The Masters. Let’s call someone who’s won The Masters 2 or more times a Legend. The total number of Legend wins divided by the total number of events in that era gives you “% of wins by A Legend.” That percentage is 67%, 57%, 55%, and 41% for each era, respectively. Less Legend domination - what once was closer to an aristocracy is becoming more of a democracy!

It used to be that the pro golf ecosystem completely reset itself, as if via a massive forest fire. Now it’s more like a series of staggered mini-fires that burn different parts of the forest at different times, so there’s always a part that is mature and a part that is starting anew.

(I promise that’s the end of the metaphors)

On that note, I’d like to highlight The Don of Málaga and #2 global cigar ambassador (trailing only Michael Jordan), the hilarious 50 year-old Miguel Angel Jimenez. He could break Jack’s age record of 46 this week. Also, the savvy and promising 20-year old Jordan Spieth could break Tiger’s age record of 21. Either would be awesome.

Winners in their 40s

Tiger Woods will be 39 if/when he competes at Augusta in 2015. Not many with age older than he will be have won a Jacket. Here’s the List in chronological order: Hogan (40), Snead (41), Player (42), Nicklaus (46), Crenshaw (43), and O’Meara (41). 6 times in 77 events (8%). That’s it. We already know all about how Gary Player treats his body like a temple. Snead was a yoga practitioner. Hogan had the best work ethic of anyone. Jack is Jack. Contrast with the need for two hands to count Tiger’s surgeries and Hank Haney noting the drop-off in Tiger’s work ethic. The 2 other 40-something-winners are also the most recent examples, so maybe that bodes well for Tiger. Who knows. I’m rooting for him.

The Overall Average Winning Age after 77 playings of The Masters is 32 years old. As Joe Posnanski wrote in his article last week, Tiger was 32 the last time he won a major, the 2008 U.S. Open.

Adam Scott was 32 when he won last year. The highest-ranked 32-year-old in the 2014 Masters field is Graham DeLaet. Brandt Snedeker is 33, and Bill Haas, Ryan Moore, Louis Oosthuizen, and Hunter Mahan are 31. Oosthuizen and Snedeker have been there before on Sunday. If you’re in a Masters pool, I suggest you pick one of these 6 guys. You might thank me on Monday ;).