There's a new world number one in the golfing world... and that man is Justin Peter Rose.

Born in Johannesburg to English parents, Rose would move to England at the age of five and by the age of 14 he was playing off a handicap of +3. It was quite clear that, from early on, he was destined for a successful career in the game. 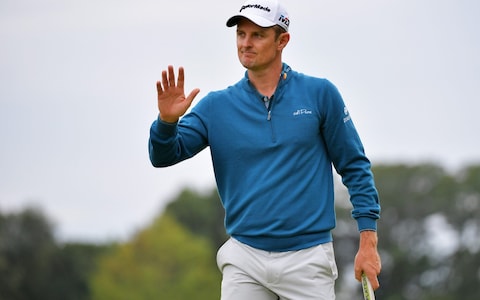 This past week, despite failing to get over the line at the extended BMW Championship, the current Olympic champion managed to dethrone 2016 U.S. Open champion Dustin Johnson and, in doing so, became only the fourth Englishman to rise to the summit of the men's game.

In honour of 'Rosey' becoming world number one, we thought we'd chart the progress from promising amateur through to major champion and, latterly, the man who sits atop the Official World Golf Rankings.

Rose's Route To World No.1

More famous than the fact that he finished as the leading amateur that particular year was the style in which he closed out his final of 72 holes.

Catch his stunning hole-out below (what a way to announce yourself to the golfing world)...

When he finally managed to break his maiden major duck in 2013, Rose would have been forgiven if his overriding emotion were to be one of relief at having achieved a lifelong dream.

With the victory coming over Fathers Day weekend in the US, his immediate thoughts turned to his own father who passed away in 2002 and who had been both a mentor and staunch friend throughout his formative years in the game.

It was an emotional occasion, that's for sure.

There was little to separate both Rose and Swede Henrik Stenson through 71 holes of their Olympic duel and it would take a closing birdie to allow the Englishman to claim a prize he still holds so dearly.

Stenson could easily console himself with the fact that the Claret Jug which he won after another ding-dong battle - this time against Phil Mickelson - was safely tucked away back at his home in Sweden.

Check out the highlights of Team GB's 'Golden Boy' on golf's return to the Olympic calendar...

Strong Play This Past 12 Months

To climb to the top of the tree in the men's game it's going to take some stunning play over a sustained period of time - and that's most definitely the case when you're trying to usurp Dustin Johnson.

With four tournament wins in the last 11 months, and three runner-up positions in his last five starts, it's clear to see that there are few players who have been able to match Rose for sheer consistency this past year (despite Koepka's glorious duo of major titles in 2018).

A two-stroke victory at the WGC-HSBC back in October 2017 kick-started a stunning run of form...

An Emotional Message To His Biggest Fan...

Though he may have come up just short at Aronimink Golf Club, a second-placed finish was enough to rise to the summit of the game.

The new world number one had a special message for his biggest fan...

We did it Dad.... World Number 1⃣ Thank you so much to my family, friends & everybody that has helped me achieve this incredible goal. Also, my sponsors @TaylorMadeGolf @adidasGolf @Hublot @Mastercard @ZurichNAnews @MorganStanley @LamkinGrips Thank you! #Team🌹 pic.twitter.com/geZgcpTR7U

Can Rose make the top spot his own as the 2017/18 season comes to a close? Could he make a real difference at Le Golf National in a fortnight's time? Let us know below...

Need a little help with your own golfing journey this year? Get more from your golf game by downloading our golf app FREE today - simply click your app store button below.