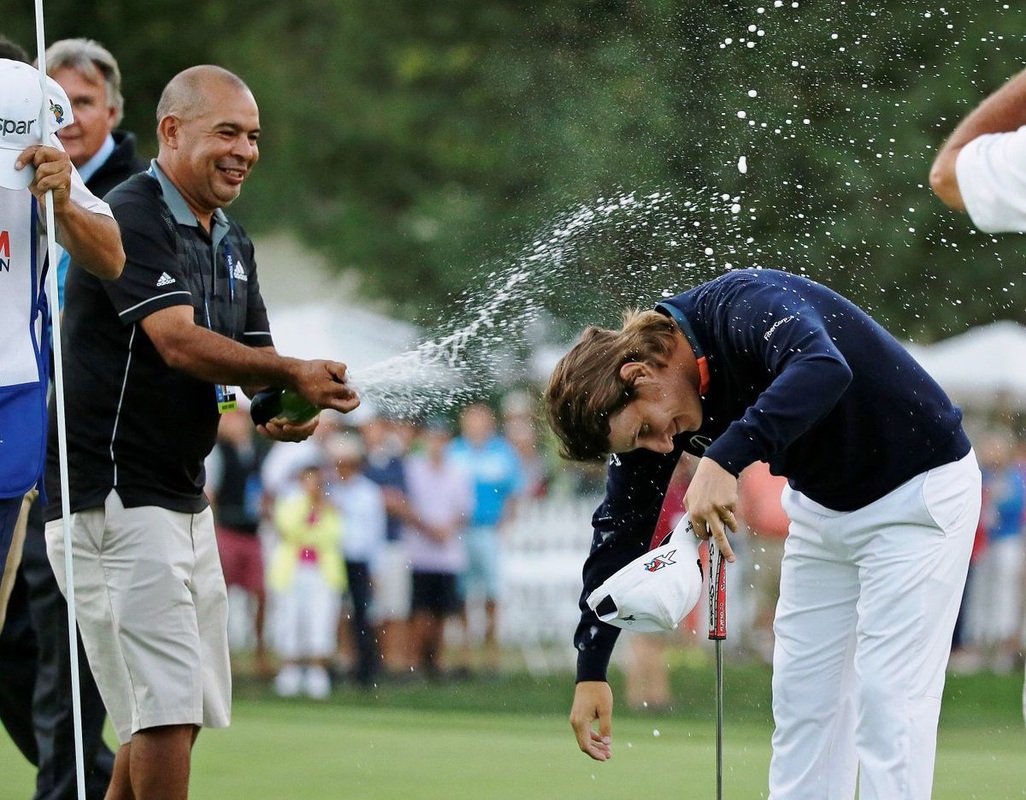 Associated Press - Emiliano Grillo is sprayed on the 18th green of Silverado Resort and Spa’s North Course after winning the PGA Tour event on Oct. 18, 2015.

The PGA Tour is back – did it ever go away? Less than three weeks after the season-ending Tour Championship, and a mere 11 days since USA’s glorious 17-11 Ryder Cup victory, this week serves up the first tournament on the 2016-17 PGA Tour calendar - the Safeway Open.

The impressive Silverado Resort and Spa’s North Course in Napa, California will, once again, play host to the season-opener. A 7171 yard par 72 test awaits the players and, with quick, slopey greens as its main defence, strong wedge play may well seal the deal for the eventual winner.

Whether a surprise or not, news that Tiger Woods has decided to pull out of the event has left a lot of golf fans feeling frustrated. The 14-time major winner has described his game as “vulnerable” and, although in good physical condition, he is worried that his current mental approach leaves him unable to compete with the world’s best.

Currently ranked 786 in golf’s official world rankings, this was to be the long-awaited return for Tiger. He has, however, opted to pencil in his Hero World Challenge at the start of December as the newest planned reappearance. Let's keep the eraser handy - just in case.

There may be no Tiger, but the show must go on!

Last year’s tournament – the then named Frys.com Open – was won by <a href="http://bit.ly/2dvwuxw"target="_new">Emilliano Grillo and this saw the Argentine become the fastest rookie to pick up a win on the PGA Tour. He will seek to retain his title but will face stiff opposition in that quest.

The field boasts some solid names. The man defeated by Grillo in a play-off, Kevin Na, will look to go one better and two of USA’s triumphant Ryder Cup team – Phil Mickelson and Matt Kuchar – are taking part less than two weeks after helping the Americans to their much lauded win.

One man who perhaps should have been at Hazeltine – but fell foul of European Ryder Cup qualification rules – was Paul Casey. He tees it up in California with one of the most consistent games on tour and has a real chance of topping the leaderboard come Sunday. In this current form he could chalk up an early PGA Tour win, something which has eluded the Englishman since the 2009 Shell Houston Open.

Two of the Tour’s fledgling talents, Justin Thomas and Bryson DeChambeau, will be aiming to get their seasons off to a positive start - the latter only a few months after having secured his tour card through the Web.com playoffs.

Thomas was firmly in the mix for US wildcard consideration towards the end of last season after a great year which included picking up the CIMB Classic. It may be that this was a Ryder Cup too soon, however he should most definitely be considered ‘one to watch’ for the coming year.

This season’s FedEx Cup points race consists of 47 scoring events and the Safeway Open sees the commencement of a seven-tournament stretch through to the end of November, before the Tour recommences at the start of January with the Tournament of Champions in Hawaii.

Who will take the 500 points on offer this week in California? We have no idea – but let’s look forward to a real golfing treat as we find out this coming Sunday.