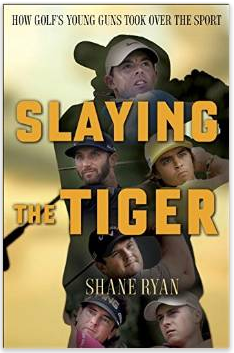 They said he was a writer for Grantland and Paste Magazine. They said he contributed to Golf Digest.

They said he had a cheeky Twitter feed. They said he was releasing a new book in May 2015.

I should have known he'd be a walking quote.

He's Shane Ryan, and he's bestowed his gifts upon the Hole19 legion. Listen in to hear how he fought for interviews with Rickie Fowler and Jordan Spieth, about the time he almost got duped by the PGA Tour into signing over the content rights to his book, and much much more (Table of Contents, Quotes, and References below):

"[Tiger] created this legion of golfers in his own image, who are now 20-30 years old, and they are the ones now dominating the sport. Because there are so many of them, it makes it harder for them all to win, but the great irony is that it makes it harder for Tiger to win. The generation that he created is now beating him." (11:23 mark)

"Golf is a sport that, it rewards an obsessive kind of work ethic. It doesn't necessarily reward the best athlete all the time. The guys that make the pros are the ones that don't get sick of playing golf, that have this inner drive. The ones that become complacent, I don't think they stick around for a long time." (13:55 mark)

"I was very self-conscious in the beginning about approaching anybody, agents or players. You have to do it. You have to go up on the range and talk to these guys, and it was really intimidating for me, but by the end, it was not at all." (20:05 mark)

"As little as a year ago when he won those 5 tournaments in 2013, I still thought [Tiger] would catch Jack Nicklaus, and now, I think that's impossible, and I also would be shocked if he won even 2 more majors. Even 1, I think, would surprise me a little bit. It's just not the same guy anymore." (27:06 mark)

"Talking to [McDowell], you get a sense of real intelligence...the kind of intelligence where they really seem to have perspective on what the world is, and can sort of look outside their circle that they exist in." (28:51 mark)