When you hear the words **"pro golfer"**, you think of the best players in the world that you see winning majors on TV like Rory McIlroy and Jordan Spieth. But you have to remember, there are thousands of young, talented professional golfers out there that are trying to "make it".

"Make it" - get your Tour Card, get sponsored, and earn good money. What's interesting though, and what every golfer can relate to, is the whole process of small improvements, little wins that happen as you make your way up- or probably more accurately, 2 steps up, and 1 step back.

That small win could be making a cut, shooting a low score, beating a player epitomizing a higher level, or improving in a stat category over the length of a season. 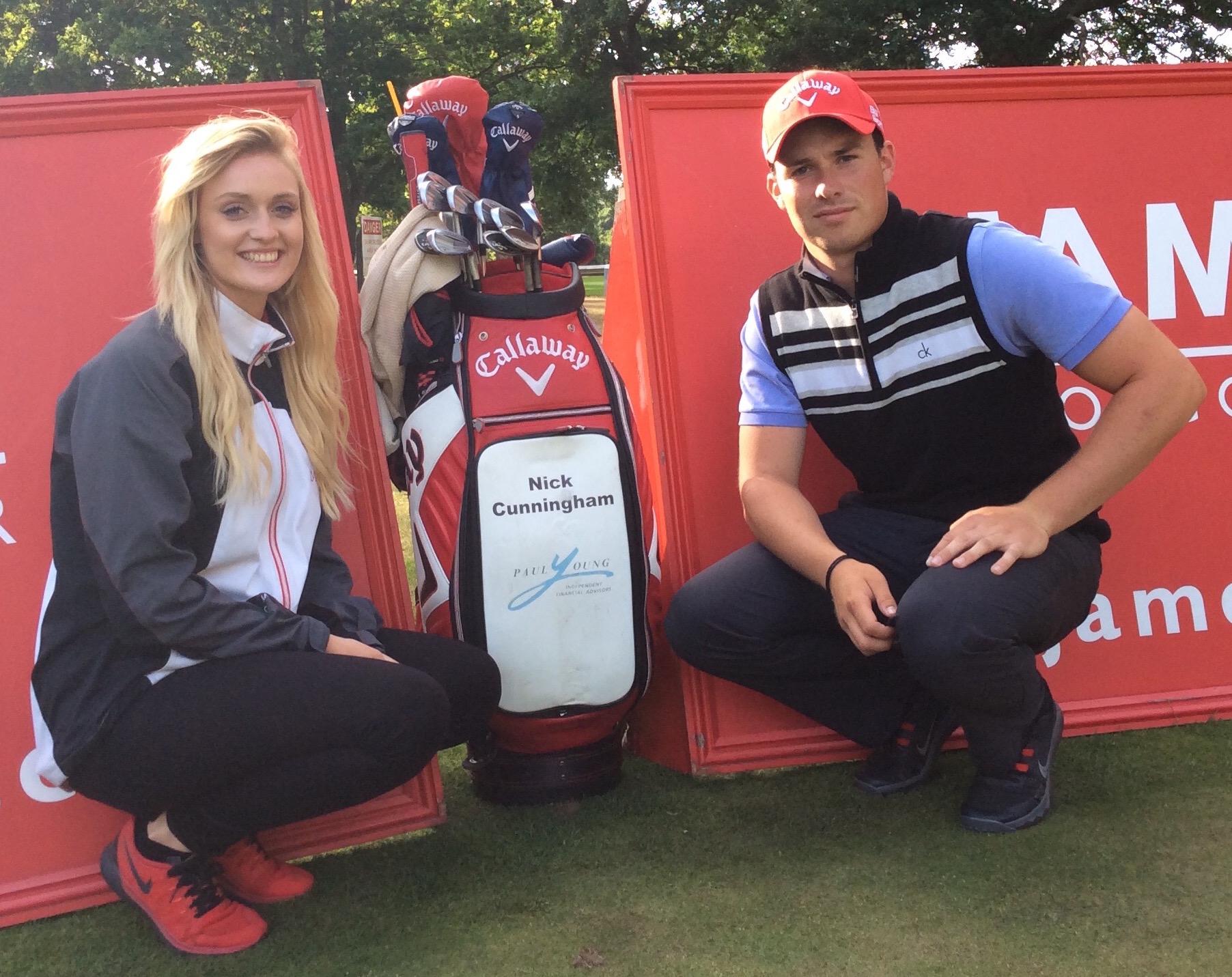 **Nick Cunningham** is in that midst, of improving his game, showing it in tournaments, and building confidence. We thought it would be interesting to get his perspective following his biggest challenge yet- stage 1 of European Tour Qualifying School- and more specifically, talk about small wins.

Who is Nick Cunningham? He's a 22-year old up-and-comer that plays calmly, and aggressively. From Bedford, England, Nick was a competitive and successful swimmer growing up, before giving it up to focus on golf at 15. Five years later, he turned pro as he took a job as an Assistant Professional at Bedford & County Golf Club[^1] with a dream of one day playing on Tour.

Maybe that part smells like the Ian Poulter story, who famously turned pro as a 4 handicap. Nick is a member at Poulter's home club of Woburn Golf Club, where the British Masters was held 3 weeks ago, but his game is said to be more like that of Eddie Pepperell, another English up-and-comer who briefly led on Day 3 of The Open Championship this summer: compact, powerful swing and a great putter.

Nick made significant strides this summer, having made it to Final Qualifying for The Open Championship and having won his first professional tournament on the Jamega Golf Tour[^2].

Nick uses the Hole19 App to save his scores, track his progress, and share his stories as he climbs the ladder of the professional ranks. Those who have the App can follow his activity and get inspired to achieve their own small wins. 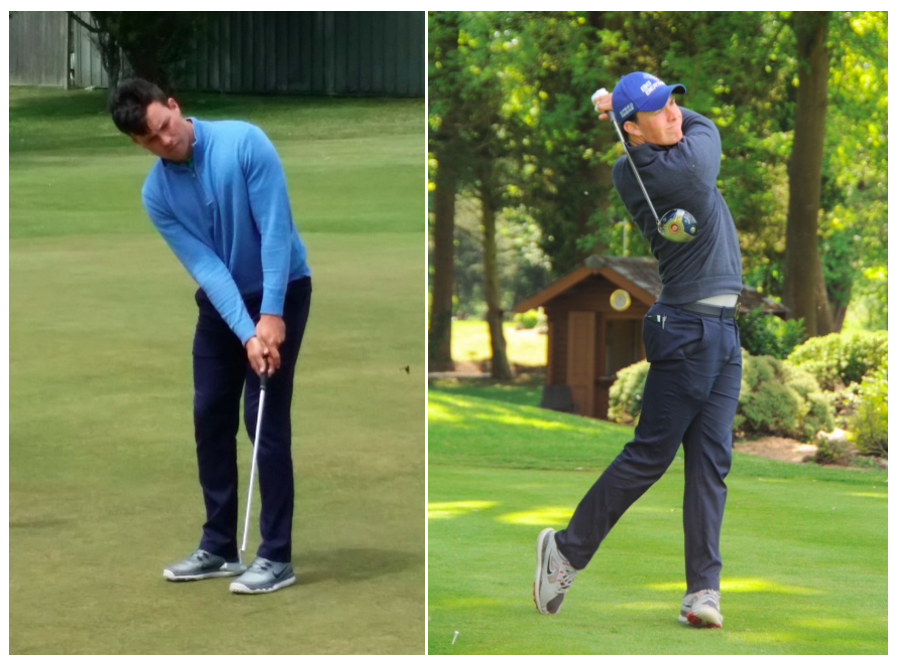 ###I. What was it like to play in European Tour Qualifying School?

It was really good. I had never done it before. My coach, Steve Vinnicombe[^3], came down, and he's quite a settling guy. He knows how my brain works, and he just got me really chilled, which was good. He caddied for me as well.

It was actually the most nervous I've ever been. I mean, the first tee was like, "woah". I'm usually good with nerves. This year, Final Stage of The Open Qualifying was no big deal[^4], even competing against lots of established Challenge Tour and European Tour pros. There, I was paired with Chris Paisley[^5], and it was fine. I played right with him[^6].

I think in my head, I had hyped Tour School up so much. It was like, "alright, this is game time now, this is where you take your big steps forward".

It was my first 4-round tournament as a pro as well, so that was a bit different.


II. How does playing a 4-round event different than any other?

I think you have to approach it slightly different. When you play 1- or 2-day events, you just go as low as you possibly can. The first 4-5 holes, you settle in, and then, I find, you tend to be a lot more aggressive.

At least I do, because generally, I'm quite an aggressive golfer. So I find it quite difficult to reign it in a little bit. Especially with putts, I've never been one to die putts into the hole. I'm normally like, "just hammer it into the back, and that's sorted".

But in a 4-day event, the first couple days are just setup days. Most importantly, you want to just put yourself in good position for the last 2 days, so playing really aggressively doesn't make as much sense.


III. How did you prepare for Q-School?

I went to Dubai the month before and practiced, trained and played in a few events[^7] out there. It would have been nice to play better in Dubai, but it was always in my head that it was mainly preparation time. First and foremost was prepping for Tour School.

You know, I think the toughest thing in golf is learning how long it takes you to peak. For example, my coach, Steve, says that it takes him about 15 days of really solid practice and then he would really notice his game taking a bit of a step up. Obviously, you can't play well all the time, otherwise you just get burned out, mentally. Tour School was the 6th or 7th week in a row in which I played competitively.

We were both very conscious of the fact that I had played quite a lot of golf leading up to [the tournament]. But I was there 4-5 days before, so I was one of the first guys there, which was nice. So I didn't have the strain of thinking, "I need to see this course a couple of times [before starting]".

A lot of guys played 18 holes 6 or 7 days in a row, whereas I just played 9 holes on Thursday, Friday, Saturday, practiced Sunday, then played 9 holes Monday, and the Tournament was Tuesday to Friday. So I was not as fresh as I could have been, but I was feeling pretty good considering how much golf I had played leading up to it.


IV. Did you set score targets for yourself each day? Or was the approach simply, "go out and play and add them up at the end"?

I never set myself a score. My coach always tells me, "it's good to be aggressive, but you don't want to go chasing a score". Say your goal is to shoot 4 under, and, just for example, you start par-par-bogey-bogey. You're 2 over. So all of a sudden, you "have to" play in 6 under. It's just unnecessary added pressure.

Sometimes I do set myself birdie targets though. When I'm playing really well, I'll say, "I'm going for 7 birdies today".

This year, I've started to go a bit lower, scoring-wise. My low round coming into this year was only 4 or 5 under. And this year, I've shot 6 under 5 or 6 times; shot 7 under a couple of times.

My approach to the Tournament was just, you've got to treat it as unimportant as you can, I think, as long as you're taking your time, and you're doing all the right things. If you've got in your head that you're out on a Sunday afternoon with your mates, that's perfect. It's just the time and care you put into each shot in tournament golf is that much greater.


V. What were your takeaways after the Tournament?

Considering how disappointed I was [not to make it to the next stage], I actually came away from it more confident than I went into it.


VI. Where do you go from here?

Just going to Tour School, you can get a Challenge Tour Associate Membership. Because I made the cut as well, that gives me a slightly better ranking to get into events. You'll get a couple for sure, and if you're lucky, you could potentially get maybe 6. So you've got to try to do something when you get those opportunities.

Besides that, I'll probably play events on either the Euro Pro Tour (all around the UK) or Alps Tour (all over Europe), so we're weighing the pros and cons of those. The Euro Pro has taken a step forward recently, because now you can get World Ranking points from Euro Pro events.

Then there are a few events you can try to Monday-qualify for, like the French Open and Irish Open on the Challenge Tour, so I'll try for a couple of those on top of the ones I get into straight away.

So if you get a bit lucky and hit on a few of the qualifiers, you can maybe play in 10 Challenge Tour events, which would be great, and with that, you've just got to play well in a couple of them and you can earn higher status and earn more starts and just build from there.


**Building** with **small wins**. That's what the Hole19 App is all about. That's because, when you use Hole19 for GPS distances and to track your stats, you become more engaged with your improvement. [Get Hole19](http://hole19app.com/3035) to start building a better game today.