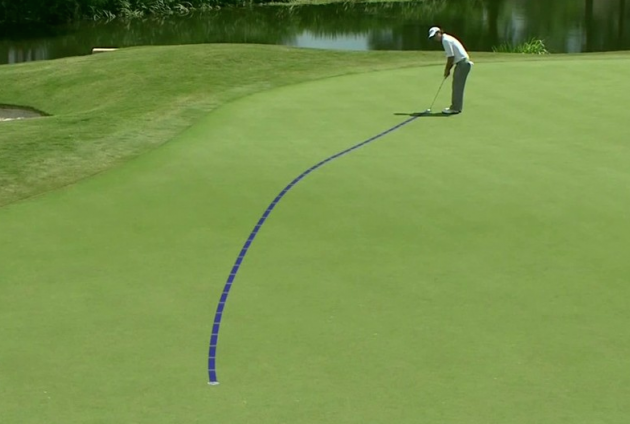 "First of all, you're a good putter."

We were on our way from the second green to the third tee. I had told Dave Wallis, a fellow member at Belas CC and a Professional Performance Coach, that I had struggled with my putting that morning, and really, for the last several months. I had told him that I had adjusted my grip to be held less in the fingers, that I had trained with my right foot pulled back to groove a stroke that doesn't produce "slice"-spin. Thinking, analyzing, tinkering. But not putting.

Dave responded, "I noticed immediately that when you take your stance and are over the ball, your eyes stare at the hole and only at the hole. That tells me that you are ONLY concerned about making the putt."

"Yeah. Isn't that the point of putting?", I retorted.

"You're so focused on RESULT. So much so that you sacrifice concentration on making a good stroke. What's more, you subconsciously place all your energy in whether the ball goes in or not, and ultimately have a negative response when it doesn't. Over time, even in a few holes, after you inevitably miss some, you tire and lose confidence."

Then he offered his practical advice:

"Just putt the picture. Visualize the picture start to finish. From it's current resting point to it's next resting point. Instead of looking at the hole, look at the point where the ball will come to rest - the end of the picture. Then focus on making a smooth stroke."

The implication is to "picture" a line that ends, say, 18 inches beyond the cup on the low side. The hole just happens to be "in the way" 18 inches before its resting point.

All of a sudden the task is hitting a ball from one resting point to another. "I can do THAT," I say to myself. Dave seemingly read my mind: "it's much less daunting than trying to hit a ball in a small hole, isn't it?"

This seemingly small change from "trying to make the putt" to "making my best stroke to match the picture" has actually been quite profound. It immediately helped my putting, and the rest of my golf game.

It's more than just a "swing thought" over the ball. It's actually an altered mindset from before to after making the stroke: from reading the putt, to where your eyes look once over the ball, to stroking the ball, to your reaction to the result.

For me, the most amazing change is my relative indifference to whether a putt goes in or doesn't. That's secondary. It's all about the experience- the fun- of making a good stroke.

But did I mention I am making a lot of putts?

Since Dave directed me to this profound insight 3 weeks ago, I've played 3 rounds (2 were in a tournament and 1 was a practice round for a different tournament). I had played neither course before, so didn't "know" the greens of either. I had 32, 29, and 28 putts, respectively. Compare those numbers with my average putts/round prior, 33.5 (I checked my profile on the new Hole19 Clubhouse).

This newly adopted mindset has, without a doubt, rubbed off on the rest of my game. In the second round referred to above, I shot 74, my best round of the year by far. In the third, I bettered that when I shot even-par 71.

The change in focus from OUTCOME to EXPERIENCE- of the present, of just hitting shots- has made all the difference.

About Dave Wallis -- Dave works with a number of sports clients, specifically on improving their mental approach to the game, helping them to create and then maintain a positive mindset.

You can click here to send Dave an email.

As always, you can download the Hole19 GPS iPhone app free for accurate on-course distances, shot-tracking and stat-tracking. Enjoy and play well.