On the 23rd November Tiger Woods and Phil Mickelson will meet in Las Vegas for a colossal winner-takes-all purse of $9M in what's being billed as a golfing clash for the ages.

It might not be for you - it's certainly not for eveyone - but the whole prospect of the meeting of two giants of the modern game has the entire golfing world talking.

Here's some of our own thoughts...

The Tale Of The Tape 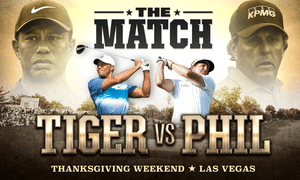 How Did 'The Match' Come About?

The whole idea of a 'Tiger v Phil' golfing battle royale was first discussed at the Players Championship back in May. The two men were paired together during that week and Mickelson then conceived the idea of a winner-takes-all match.

Woods was keen not to shirk the challenge and quickly stated that he was happy to play for "whatever makes him (Mickelson) uncomfortable".

And the rest, as they say, is history...

What Do We Know About The Format

Taking place on the Friday after Thanksgiving in America, the format will take a standard match play approach, while there will also be side bets throughout the 18 holes.

These side bets - so we are told - will range from long drive contests to closest to the pin challenges, and all the way through to other games yet to be determined. Accumulated side bet winnings will go to designated charities of each player's choosing.

While exact information on the definite format is a little sketchy at present, American broadcaster HBO are certainly excited about the match-up if their recent tweet is anything to go by...

Step inside one of the greatest rivalries in sports before their winner-takes-all event.

Should it even be on PPV at all is perhaps a better question.

Just this past week came the announcement that American viewers will be charged $19.99 to watch the two multiple major winners go head-to-head in little over three weeks at Shadow Creek.

As with anything in life, this spectacle is worth what the viewing public is willing to pay. When you listen to a lot of the comments since the pricing was announced, perhaps not - time will tell though.

Tiger Woods remains the biggest draw in golf and the 'rivalry' with Phil Mickelson does provide an element of interest in this contest.

It's undoubtedly the case that golf is in need of a few innovative ideas to help capture the imagination of the golfing (and currently non-golfing) public.

Whether this is one such idea, again, time will tell we guess.

We couldn't let you go without giving you our most memorable shot from each golfer.

This may not be a surprise but we make no apologies for finding another opportunity to remind you of Woods' miraculous chip at Augusta National during the 2005 Masters...

At the same venue Mickelson hit pretty much the shot of his career en route to a Green Jacket in 2010...

What are your own thoughts about the head-to-head between Tiger Woods and Phil Mickelson. Is this a match that has you interested? Let us know below...