This week on the European Tour the final trio of Rolex Series events, collectively known as the 'Final Series', gets underway with the Turkish Airlines Open taking centre stage at Regnum Carya Golf & Spa Resort.

With big money on offer normally a stellar field would be in attendance, however with continuing tensions in the area, quite a few big-name golfers have decided to give Antalya a miss in favour of restarting their Race to Dubai quest at next week's Nedbank Golf Challenge in Sun City, South Africa.

With that said, there will be plenty of world-class golfers on show to keep your interest piqued and, of course, below you'll find our very own preview of this week's European Tour action. 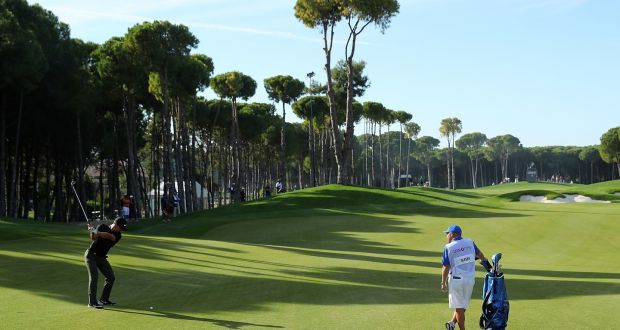 The Regnum Carya Golf & Spa Resort in Antalya, Turkey is a par 71, 7,159-yard test and it replaced the Montgomerie Maxx course as host venue back in 2016.

As far as European Tour tracks go, this course is pretty gettable despite water being in play on almost half of the holes. There will be many birdie opportunities and a low winning score is pretty much inevitable so, without trying to state the obvious, greens-in-regulation and solid putting will be required of any golfer hoping to come out on top in this first 'Final Series' event of 2018.

The 2017 edition of the Turkish Airlines Open was won by the current world number two Justin Rose and came in the middle of an impressive run of three wins in six events for the Englishman.

Catch Justin's reaction to last year's victory below (and check out how the trophy was delivered)...

The world's top 60 golfers are all eligible to play this week in Antalya along with invites, however, due to the security fears already alluded to above, only three of the top-10 in the Race to Dubai standings have elected to tee it up.

Along with Rose (15th) who defends his title this week, the trio of Tommy Fleetwood (2nd), Thorbjorn Olesen (6th) and Russel Knox (10th) will each fancy their chances of adding another European Tour title to their own golfing CVs. Like Rose, Olesen has a Turkish Airlines Open win to his name, while all three have secured wins in 2018 to help them to their lofty perch in the standings.

Fleetwood will aim to capitalise on Francesco Molinari's absence to reduce the current 1,207,383 points deficit in the Race to Dubai standings.

Since the introduction of the 'Rolex Series' in 2017 no golfer has finished inside the top ten on more occasions than New Zealander Ryan Fox and he will seek a first European Tour over the four days in Turkey.

The South African Brandon Stone also plays this week and he's got a few top tens under his belt since he won the AAM Scottish Open in fine style back in July - almost becoming the first player to shoot a 59 on the Tour (something that was eventually achieved by Oliver Fisher at the Portugal Masters two months later).

Below Brandon reflects on his '59-club' near miss...

With a field that is missing seven of the current top-10 in the Race to Dubai standings, the 2018 Turkish Airlines Open is pretty wide open. Can we pinpoint a possible winner? Well, no promises but we can certainly give it a good shot.

The 'MoliWood' bromance may well be put firmly on the back burner this week as Tommy Fleetwood aims to close the gap on the current Race to Dubai leader. We think that will provide all the motivation required and, as we all know, Tommy's got some real game and all the skills to get the job done.

If 'Sulli' can get his putter to behave for this week's European Tour event then he will have every chance of challenging at the head of affairs.

Who do you think could make their mark at the first 'Final Series' event of the year? Who wins the Race to Dubai title from here? Let us know below...